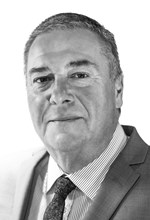 Grahame is the Non-Executive Officer of Search Consultancy and has been with the group since leading the first management buy out in 2000. He was also behind the most recent management buy out in May 2017 which resulted in new investment from H2 Equity Partners. Grahame’s role oversees the business, but still sees him visiting clients, both current and prospective.

Grahame has been involved in the recruitment industry since 1978.  He started his first business Xpert Recruitment in 1981, which grew organically from one office to 14 offices across the south of England and was sold to Kelly Services in 1991.  In the same year, Grahame was appointed UK Managing Director for Kelly Services.  During the next eight years Grahame oversaw the significant growth of Kelly’s UK business to approximately £216 million of turnover and around 900 staff, before assuming responsibility for Kelly’s Northern European business.

Grahame is passionate about Search as a business and the 700+ people who work for the organisation. He is proud to lead a team of driven individuals all pursuing the same goal.